We are facing a dilemma. As I mentioned in the last blog post, we are able to communicate in such a way now that our world becomes smaller and smaller. But at the same time we are more and more isolated. What has happened within the Catholic Church is an inverse to what is around us. We had centuries of being isolated one from another though lack of technology. Letters and infrequent visits were the limit for many centuries for the passing of information. But fortunately for the Catholic Church we had a unifying language, Latin. In this way, with one language, the Catholic world could communicate anywhere to anyone, within the hierarchy at least. So while there was little communication, it was universal when had.

This did not mean that everyone spoke Latin, nor that everyone understood the language. But it meant that official documents and letters were promulgated in that Language and translated after. And liturgy was all conducted in Latin, so that anywhere on the planet, a Catholic Church was easily accessible to the those who travelled since the Mass was the same everywhere and in the same language with the same music. It was universal in was inclusive of all languages and cultures by the nature of a single language. Some will criticise this as being too binding and didn’t allow for local flavour and invention and use of vernacular. But then the point of universal is just that, it reflects the universal and not the local.

What has happened since 1970 is that the Mass and liturgies are in the vernacular and documents are in one of a thousand languages so that then there is nothing universal. Local triumphs, even if that means the exclusion of others. Was this the vision of the Second Vatican Council? I can’t imagine that they wanted the fragmentation of the Catholic people into small linguistic, national or tribal groupings. But this is what has happened.

In the country were I originate that means Mass usually in either English or French. Sometimes a bilingual liturgy if the priest is adept at both languages. Communication with Rome is in Italian rather than Latin as fewer and fewer people can read and write Latin since it is no longer taught in schools and not emphasized in seminaries.

The result has been the “balkanization” of the Church. Episcopal Conferences taking the lead in many areas and seeking greater control over decisions in areas that are actually for the Church universal. As well, the language of use is local and so divides the conferences and dioceses further. In Canada the Canadian Conference of Catholic Bishops operates in English and French. There are also regional conferences. In the Quebec Conference the language is French. In the western provinces of Canada mostly English is used.

Because of this the area I now reside and work has become excluded to me liturgically. I live in an area of Tonga people next to Lake Malawi. The diocese is Mzuzu which speaks Tumbuka. The liturgical books are printed in Tumbuka and used, with some resentment, by the Tonga people who prefer their own language. There is no Tonga translation as there are only 170,000 speakers of the language, so not enough to warrant a full translation of the Missale Romanum.

It is not always a pleasant experience to sit through a two-hour Mass in a language I don’t have or for which I only have a few words. I am excluded from the liturgies around me. And because I am not from a religious community sent here to work for an indefinite amount of time like the White Fathers or the Franciscans, I am not sent for language training and will simply learn what I can “on the ground”.

So instead I celebrate Mass alone, for the moment, in the Extraordinary Form in the chapel where I live. This I am thankful for. But is a sad demonstration that the Church universal has become so localized that it is not universal any longer. I am priest of the universal church, the Catholic Church, and yet not able to celebrate the sacraments with anyone here based on a decision made in 1970 concerning liturgy. I can celebrate Mass in Latin, English, French and German but not in Tumbuka. I can’t imagine that this was the vision of Vatican II either.

If we read the documents of the Council, we see that this was not what was envisioned but rather a limited use of vernacular in the Mass. And Latin was to remain the language of liturgy, Gregorian Chant to remain the music of the Church, and the Mass before 1970 to be the Mass of the future as well as the previous centuries. 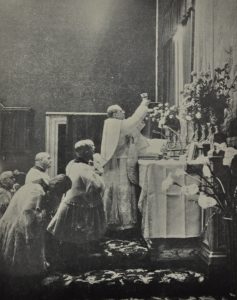 Pius XII warned in 1947 against: “…a mania for restoring primitive usages in the liturgy” which was attempted with the Missale Romanum of Pope Paul VI. Again, Pope Pius XII stated in the same encyclical letter of 1947 that: “…We observe elsewhere, with anxiety and some apprehension, an undue fondness for innovation and a tendency to stray from the path of truth and prudence” (Pius XII, Mediator Dei). If he could see the liturgies in many places today, what would he think?

If, as a minimum, the Church could maintain the liturgy in Latin, as Benedict XVI permitted with his Motu Proprio Summorum Pontificum, then the universality of the Church is maintained. In its worship, by the free usage of the Extraordinary Form of the Mass, a continuation, rather than a rupture with the lineage of the Church at prayer is found. The Church again becomes a symbol of unity and inclusion in diversity. People of any language and culture will find a welcome in any region of the world, which it has lost since 1970.

One of the greatest gifts is to be taught when to say nothing… Allow silence into the spaces of life and there will a greater peace for each of us.

Places that change us

At some point in our lives we find ourselves at a place and time that leaves an impression on us, indents itself into our being. Often this is connected to an event or series of events. The result is a lasting change to our lives, sometimes good and sometimes bad. Sometimes these moments are without asking, others are our choice, and some of them change us in ways we did not expect.

Think of all those plans we make day to day. All the people we meet either in person or in social media. How did we come to make those plans? How did we meet those people. Did everything go according to plan? Was someone rude to us? Did we get slandered in social media? How did we react? It is not only our actions but our reactions that decide if we remain in God’s presence.